Body and Soul: Notebooks of an Apprentice Boxer

When French sociologist Loïc Wacquant signed up at a boxing gym in a black neighborhood of Chicago’s South Side, he had never contemplated getting close to a ring, let alone climbing into it. Yet for three years he immersed himself among local fighters, amateur and professional. He learned the Sweet science of bruising, participating in all phases of the pugilist’s strenuous preparation, from shadow-boxing drills to sparring to fighting in the Golden Gloves tournament. In this experimental ethnography of incandescent intensity, the scholar-turned-boxer fleshes out Pierre Bourdieu’s signal concept of habitus, deepening our theoretical grasp of human practice. And he supplies a model for a “carnal sociology” capable of capturing “the taste and ache of action.”

Body & Soul marries the analytic rigor of the sociologist with the stylistic grace of the novelist to offer a compelling portrait of a bodily craft and of life and labor in the black American ghetto at century’s end.

Breaking with the exoticizing cast of public discourse and conventional research, Urban Outcasts takes the reader inside the black ghetto of Chicago and the deindustrializing banlieue of Paris to discover that urban marginality is not everywhere the same. Drawing on a wealth of original field, survey and historical data, Loïc Wacquant shows that the involution of America’s urban core after the 1960s is due not to the emergence of an ‘underclass’, but to the joint withdrawal of market and state fostered by public policies of racial separation and urban abandonment. In European cities, by contrast, the spread of districts of ‘exclusion’ does not herald the formation of ghettos. It stems from the decomposition of working-class territories under the press of mass unemployment, the casualization of work and the ethnic mixing of populations hitherto segregated, spawning urban formations akin to ‘anti-ghettos’. 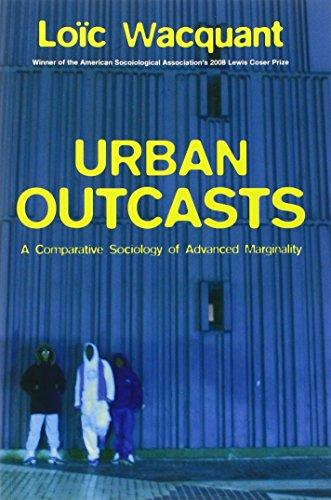 Comparing the US ‘Black Belt’ with the French ‘Red Belt’ demonstrates that state structures and policies play a decisive role in the articulation of class, race and place on both sides of the Atlantic. It also reveals the crystallization of a new regime of marginality fuelled by the fragmentation of wage labour, the retrenchment of the social state and the concentration of dispossessed categories in stigmatized areas bereft of a collective idiom of identity and claims-making. These defamed districts are not just the residual ‘sinkholes’ of a bygone economic era, but also the incubators of the precarious proletariat emerging under neoliberal capitalism.

Urban Outcasts sheds new light on the explosive mix of mounting misery, stupendous affluence and festering street violence resurging in the big cities of the First World. By specifying the different causal paths and experiential forms assumed by relegation in the American and the French metropolis, this book offers indispensable tools for rethinking urban marginality and for reinvigorating the public debate over social inequality and citizenship at century’s dawn.

Punishing the Poor: The Neoliberal Government of Social Insecurity

The punitive turn of penal policy in the United States after the acme of the Civil Rights movement responds not to rising criminal insecurity but to the social insecurity spawned by the fragmentation of wage labor and the shakeup of the ethnoracial hierarchy. It partakes of a broader reconstruction of the state wedding restrictive “workfare” and expansive “prisonfare” under a philosophy of moral behaviorism. This paternalist program of penalization of poverty aims to curb the urban disorders wrought by economic deregulation and to impose precarious employment on the postindustrial proletariat. It also erects a garish theater of civic morality on whose stage political elites can orchestrate the public vituperation of deviant figures—the teenage “welfare mother,” the ghetto “street thug,” and the roaming “sex predator”—and close the legitimacy deficit they suffer when they discard the established government mission of social and economic protection. By bringing developments in welfare and criminal justice into a single analytic framework attentive to both the instrumental and communicative moments of public policy, Punishing the Poor shows that the prison is not a mere technical implement for law enforcement but a core political institution. And it reveals that the capitalist revolution from above called neoliberalism entails not the advent of “small government” but the building of an overgrown and intrusive penal state deeply injurious to the ideals of democratic citizenship.

In the early 1990s, Mayor Rudolph Giuliani launched a zero-tolerance campaign aimed at street disorders and petty offenders, incarnated in the infamous “squeegee man.” New York City soon became a planetary showcase for an aggressive approach to law enforcement that, despite its extravagant costs and the absence of connection to the crime drop, came to be admired and imitated by other cities in the United States, Western Europe, and Latin America.

In Prisons of Poverty, Loïc Wacquant tracks the incubation and internationalization of the slogans, theories, and measures composing this new punitive “common sense,” fashioned to curb mounting urban inequality and marginality in the metropolis. He finds that a network of Reagan-era conservative think tanks (led by the Manhattan Institute) forged them as weapons in their crusade to dismantle the welfare state and, in effect, to criminalize poverty. He traces their import and export through the agency of the media and the pro-market policy institutes that have mushroomed across the European Union, particularly in Tony Blair’s Britain. And he shows how local academics helped smuggle U.S. techniques of penalization into their countries by dressing them up in scholarly garb.

Now available in English for the first time in an expanded edition, Prisons of Poverty reveals how the Washington consensus on economic deregulation and welfare retrenchment was extended to encompass punitive crime control because the invisible hand of the market necessitates and calls forth the iron fist of the penal state.

An Invitation to Reflexive Sociology

This book is Pierre Bourdieu’s’ discourse on method’: the first and only comprehensive introduction to, and overview of, the work of one of the world’s most influential and imaginative social theorists. Systematic and accessible, it is the ideal entree into the core of Bourdieu’s wide-ranging oeuvre.

In Part I (Toward a Social Praxeology), Loic Wacquant provides keys to the broader economy and inner logic of Bourdieu’s work, sketching out the contours of his intellectual landscape and dissecting the structure of his theory of knowledge, practice, and society. Part II (The Purpose of Reflexive Sociology) takes the form of a dialogue in which Bourdieu and Wacquant discuss central concepts of Bourdieu’s work, confront the main objections and criticism it has met, and outline Bourdieu’s views of the relation of sociology to philosophy, economics, history, and politics. Part III (The Paris Workshop) captures Bourdieu in action in the Seminar room, addressing his students on the topic of how to practice the craft of reflexive sociology.

Amplified by examples, notes, tips on how to read Bourdieu, and an extensive bibliography, this book is indispensable for students and advanced scholars across the spectrum of the social sciences and the humanities.